The article is published in PV Magazine

Over the past few months, the Covid-19 pandemic has caused an unprecedented global economic and social crisis all over the globe. Ukraine is no exception. The pandemic has significantly affected all aspects of life, including the country’s domestic energy sector.

In Ukraine, the fall in electricity demand has also been caused by a decrease in the volume of industrial production, caused mainly by Covid-19 (the largest consumers of electricity are industrial enterprises). Drop in electricity consumption amounts to approximately 8% compared to the same period of the last year. Due to the decrease of consumption the import of electricity from Belarus and Russia has been curtailed, planned maintenance works have been delayed.

A key factor causing the current excess of electricity is a significant increase in the production of electricity from renewable energy sources (RES), as their production schedule remains poorly forecasted, and the total share of solar and wind power plants in the daily balance of electricity production commonly exceeds 8%.

Increase in the volume of non-payments and debts, including mass non-payment by consumers

The existing problem of non-payment is further aggravated by Covid-19 implications. According to the NEURC, the average level of payments for housing and utilities services by consumers is as follows:

Universal services suppliers (USSs) supply electricity to residential and small non-residential consumers under the tariffs fixed by the National Energy and Utilities Regulatory Commission of Ukraine (NEURC). A decrease in bills paid by consumers causes a cash deficit in USSs and, by virtue of the cascade effect, this impacts the financial health of other market players in the chain as depicted below. 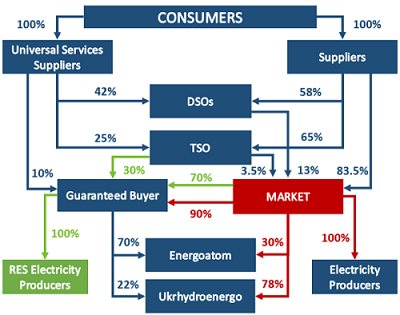