On 15 June 2020, the Draft Law “On Amendments to Certain Laws of Ukraine on the Improvement of Conditions of Support for the Production of Electricity from Alternative Energy Sources” No. 3658 (the “Draft Law”) was registered at the Verkhovna Rada of Ukraine.

The Draft Law was developed to implement the provisions of the Memorandum of Understanding (the “Memorandum”) signed on 10 June 2020 between the Government of Ukraine and two associations representing the interests of investors in the field of renewable energy sources (“RES”): the Ukrainian Wind Energy Association and the European-Ukrainian Energy Agency. The Draft Law also envisages significant changes to the procedure for the organization and holding of auctions for the allocation of support quota.

The Draft Law proposes amendments to the following Laws of Ukraine:

The Memorandum stipulates that the Draft Law should be adopted by the Verkhovna Rada by 1 August 2020.

On 17 June 2020, the National Energy and Utility Regulatory Commission (the “NEURC”) approved the Memorandum, but with certain reservations. In the opinion of the NEURC, carving out wind power plants (“WPPs”) commissioned before 30 June 2015 from the FIT restructuring mechanism is discriminatory and ungrounded. The NEURC has also voiced a concern that the tariff of NPC Ukrenergo for electricity transmission services would be increased from 1 August 2020 at least up to the level of UAH 523 per 1 MWh (excluding VAT), which is three times higher than the current tariff rate for transmission services (UAH 155.4 per 1 MWh).

The reduced FITs shall be as follows: 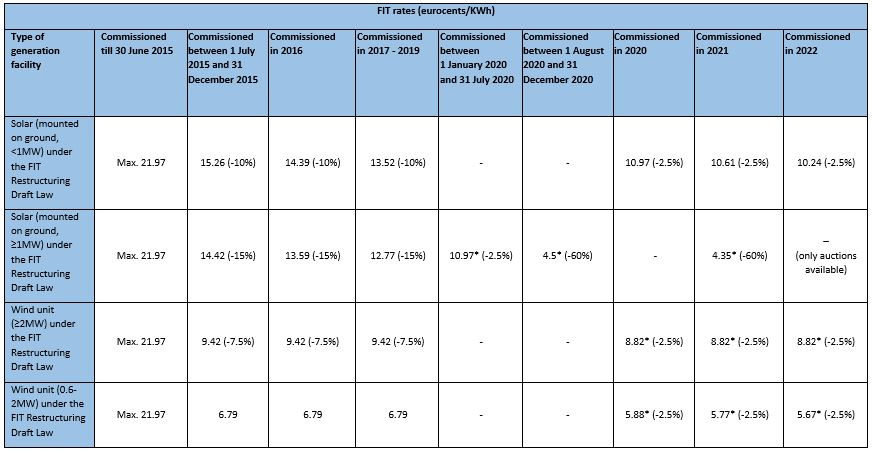 The new cut-off date for SPPs shall be 31 July 2020, while it remains unchanged for WPPs. SPPs (1 MW or more) with pre-PPAs that will be commissioned since 01 August 2020 will be eligible for FIT reduced by 60%.

The feed-in tariff rate for SPPs commissioned after 1 August 2020 will be 4.5 eurocents per 1 kWh.

The Draft Law proposes accelerated liability for electricity imbalances for RES facilities with an installed capacity of more than 1 MW: 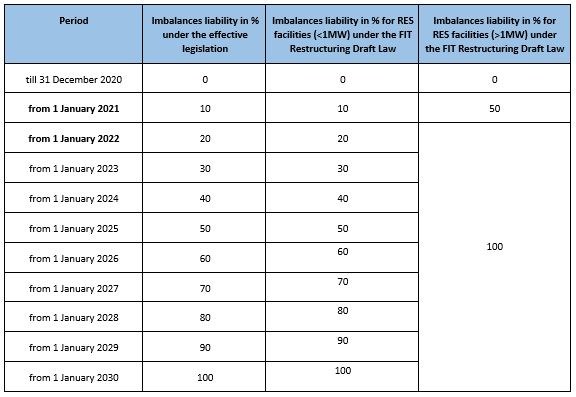 Please note that the accelerated liability for electricity imbalances does not apply to RES facilities with an installed capacity of up to 1 MW. For such facilities, as before, the gradual introduction of liability for imbalances is stipulated from 1 January 2021: 10% with the subsequent increase of 10% each year until reaching 100% in 2030.

Settlement of the issue of compensation to RES producers for curtailments

The Draft Law proposes to settle at the legislative level the issue of compensation to RES producers for non-delivered electricity in the case of applying dispatchers’ commands of the TSO to reduce the load.

The Draft Law proposes to define the TSO (NPC Ukrenergo) as the entity responsible for such compensation. RES producers will act as suppliers of balancing services, but outside of the electricity balancing market. The cost of load reduction service will be compensated to RES producers under the awarded feed-in tariff or at the auction price. The calculation of the volume of non-delivered electricity should be carried out in accordance with the methodology, which will be an annex to the Market Rules. The procedure for providing services to reduce the load by RES producers will be defined by the Market Rules. The corresponding draft amendments to the Market Rules were published on the NEURC’s website on 11 June 2020.

The Draft Law proposes to stipulate that for the period from 1 January 2020 until 31 December 2029, feed-in tariffs will not be changed or canceled for RES producers for whom FITs have already been established or will be established, and reduction coefficients will not be changed or applied in any other way which may lead to losses and/or damages and/or non-receipt of legitimately expected revenues by such RES producers.

The Draft Law also proposes to fix in the Law of Ukraine “On Foreign Investment Regime” state guarantees for the protection of foreign investments related to the application of the feed-in tariff for the entire duration of the feed-in tariff. The rights and obligations of RES producers under the PPA should be governed by the legislation effective as of the date of enactment of the relevant law.

Clarification of price caps at auctions

The Draft Law intends to provide the opportunity for SPPs located on rooftops and/or facades of buildings and facilities to participate in auctions. The Draft Law proposes to fix the opportunity to provide state-owned and municipal-owned rooftops and/or facades of buildings and other capital facilities into lease to conduct auctions for the construction of SPPs.

The Draft Law clarifies that the Cabinet of Ministers of Ukraine may, by a submission from the Ministry of Energy within the annual or additional support quota:

The features of announcing and conducting such auctions are defined by the Procedure for conducting auctions on the allocation of support quota.

The Draft Law also proposes to increase the maximum share of the annual support quota that one ultimate beneficial owner can obtain in one calendar year, from 25% to 35%.

Legislation: Draft Law “On Amendments to Certain Laws of Ukraine on the Improvement of Conditions of Support for the Production of Electricity from Alternative Energy Sources” No. 3658 of 15 June 2020.