Hillmont’s James Hart spoke at Chatham House on the 5th December on a panel that considered the drivers of Ukraine’s economic growth.

Hillmont’s James Hart spoke at Chatham House on the 5th December on a panel that considered the drivers of Ukraine’s economic growth. 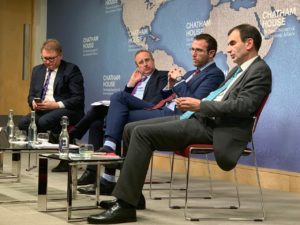 The panel was moderated by Neil Buckley of the Financial Times and included Deputy Minister of Economic Development, Trade and Agriculture, Taras Kachka and Vice President of the EBRD, Alain Pilloux.

Among topics discussed were the importance of rule of law in attracting investment into Ukraine.

James Hart noted that the government and the parliament must not only pass high quality laws, but also support the continued growth of the country’s national intuitions:

No matter how robust laws themselves are, they are only as strong as the national institutions that ensure they are upheld.

Any cookies that may not be particularly necessary for the website to function and is used specifically to collect user personal data via analytics, ads, other embedded contents are termed as non-necessary cookies.